When most people send their recyclables off with the trash collectors, they think little of where it goes and what happens to it. While many people think that recycling is the best and only way to help the environment, there are actually some troubling problems plaguing the industry, most of which revolves around the inevitability of human error. That is, until Matanya Horowitz came along to revamp how the entire recycling industry works.

Fresh out of his Ph.D. program at the California Institute of Technology, Matanya Horowitz sought to combine his love of computer visuals and robotics with his desire to help the environment. After visiting a recycling center and realizing not only how challenging work conditions were, but how wasteful the process can be, Horowitz realized that this neglected industry needed a change.

“It was a great fit, largely because no one was really working on it,” said Horowitz. “Recycling facilities are completely overlooked, so it was easy to come in and try to find solutions.”

Today, many recycling facilities receive single-stream recycling, a process in which recycling is not sorted out before it is taken to a facility, but rather sorted by hand once it has arrived. This makes single-stream recycling, although the most convenient way to recycle for households, extremely susceptible to human error. Horowitz noticed this, and decided to come up with a solution; co-founding Cognitive Robotics with his old college roommate–now known as AMP Robotics– he created a robot named AMP Cortex to revolutionize recycling.

Combining artificial intelligence with computer vision software and robotics, this spider-like robot can recognize material, including logos, and sort them out at 60 picks per minute through single-stream recycling. Instead of 34% of materials thrown out due to “contamination,” Cortex can make recycling more efficient with no waste, while simultaneously cutting costs by over 50%.

In addition, the Cortex is built to fit existing conveyor belts, so there are no retrofit costs, and installation can take place over a single weekend, so there is a very low burden for a recycling facility to install this apparatus. According to Horowitz, Cortex’s implementation could absolutely revolutionize the recycling industry, not only by cutting costs, but by bringing flexibility to often inflexible facilities, unsuited for the changing variations in recycled materials being used in the country.

Due to the rapid expansion and workload, AMP Robotics has had to work extensively with other Colorado companies, including Alpine Waste and Recycle, where the first robot prototype was tested. While Cortex is currently focused on sorting cartons, Horowitz hopes to expand its knowledge to be able to sort every kind of recycling material. The innovation of Cortex has thus been a widely collaborative effort in order to keep our environment as clean as possible. Widespread implementation of Cortex may still be quite a ways away, but their progress is promising for a cleaner, more efficient future in recycling.

Horowitz cites Colorado’s Office of Economic Development and International Trade (OEDIT) as one of the reasons why AMP Robotics has achieved what they have so far. As a Colorado-based Advanced Industry company, they were able to receive an Early Stage Capital and Retention grant of almost $100,000 in 2016, helping AMP “get off the ground.” They continue to raise funds through venture capitalists and grants, and hope to expand their operations soon.

But why Colorado? “I’m from Colorado, first of all, and operating here just makes sense,” Horowitz said. “It’s cost effective to operate here, and since there’s so much talent already in the state, we have no problem finding anyone to help us get bigger and better. I really see the potential in this thing.”

AMP Robotics currently has six employees, but they hope to hire more contractors soon. You can learn more by visiting the Colorado Public Radio interview with Horowitz. 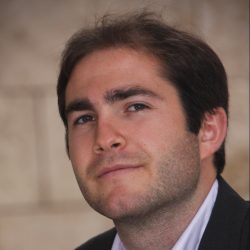